Wall AC vs Central Air: How To Make the Right Choice 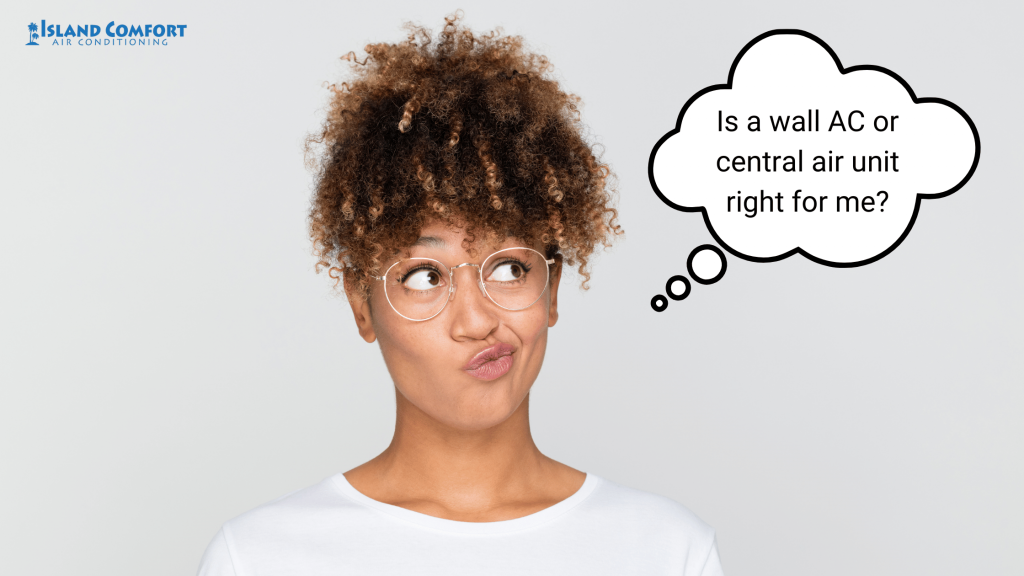 When choosing the best ways to keep your home cool, the choice is usually between a wall AC vs central air. Choosing between a wall AC unit and a central air unit can be a difficult decision to make. Today, we’ll take a closer look at what this decision entails and what advantages each system offers.

There isn’t one single solution for every Hawaiian resident. Ductless and central air systems bring different strengths and weaknesses when it comes to cooling your home. Both, however, can work for you depending on your unique situation. We’ll discover the right choice for your home by taking a closer look at these units.

An AC Wall Unit vs Central Air: How They Work

Before we get into the pros and cons of each system, it’s essential to understand how AC units work.

How Do AC Units Work?

Both wall air and central air units operate on similar design principles. The main unit draws in outside air, cools it, and redistributes it in the home. The difference between both systems is how the air is recirculated.

A wall-mounted unit cools the air in the room it’s mounted in first and gradually cools surrounding rooms afterward. A central air unit distributes the cool air evenly through ducts throughout the space.

The two systems pose different advantages and disadvantages. It all depends on your space and your unique needs.

What an AC Wall Unit Offers

AC wall units cool the entire home through a single unit mounted on the wall. They work by drawing in air from outside, cooling it, and introducing it into the room. Cooler air gradually flows throughout the house, starting in closer rooms and working outward. These are generally the best choice if you’re looking to cool a small space and make it as cool as possible.

A ductless mini split AC unit could be the right choice for your home when space is a factor. Central air units require ductwork to circulate air where it’s needed, and in some homes, there isn’t space available.

If you can’t install the necessary ductwork for a central air unit, a wall-mounted AC could be the right choice. While it does not distribute cool air as evenly as central air ducts, it still circulates cool air. On a hot summer Hawaiian day, having a wall AC unit nearby can make all the difference.

What a Central Air Units Offer

A central air unit focuses on cooling the entire home from a central location. Central air distributes cooled air from a centralized unit through a series of ducts to where it’s most needed. These are generally the best choice when it comes to energy efficiency and uniform cooling.

Central AC units are the right choice to regulate the temperature of larger spaces. Central air creates a uniform temperature throughout the home, and they achieve this in the most energy-efficient manner possible.

With central air, cool air is distributed evenly from the central unit. You should experience the same cool temperature no matter which room of the house you’re in.

Also, a mounted air conditioner makes it more difficult to seal the unit. Temperature-controlled air can leak out, requiring more energy to keep the house climate-controlled. This may lead to small inefficiencies but quickly adds up over time.

Wall AC vs Central Air: Which to Choose?

Now that you know how these systems work and which situations they’re best for, which AC unit is the right choice? Unfortunately, there isn’t a “one-size-fits-all” solution. In some cases, central air is probably the right choice. However, there are other situations where a wall AC unit gets the job done just as well.

A single central air system can also cool more rooms than a single wall-mounted unit. Depending on the home’s layout, a central AC can consistently cover a space requiring multiple wall-mounted units. It is also the most energy-efficient option of the two (which also makes up somewhat for the higher price tag upfront).

Wall-mounted units are better for covering only a few rooms or a smaller home. If you don’t have space for central air ductwork, installing a ductless unit on the wall is a great alternative. A couple of wall-mounted units can provide a similar cooling effect to your home without all the ductwork.

Generally speaking, central air is the better choice if you have the space to install it. It’s more energy efficient and provides more consistent coverage. Summer energy bills can add up. After extensive AC use, you’ll want the most energy-efficient (and cost-effective) unit possible. If that’s the metric you’re using, central air simply can’t be beaten.

However, if you don’t have the space to install central air ductwork, wall AC units are a viable solution. Wall-mounted units are fit to handle the job of cooling a mid-sized house.

Whichever decision you land on, Island Comfort is here to help with your AC installation and service. If you still aren’t sure which kind of AC to choose, we’d be happy to offer our professional opinion. As our name suggests, we want your island living to be as comfortable as possible.

We have experience dealing with ductless and central air units, and we’re happy to share that experience and get you the best air conditioning possible. After a conversation with one of our team members, we’re confident you’ll also know which is the right choice for you.