Should You Run Your Ceiling Fans and AC Together? 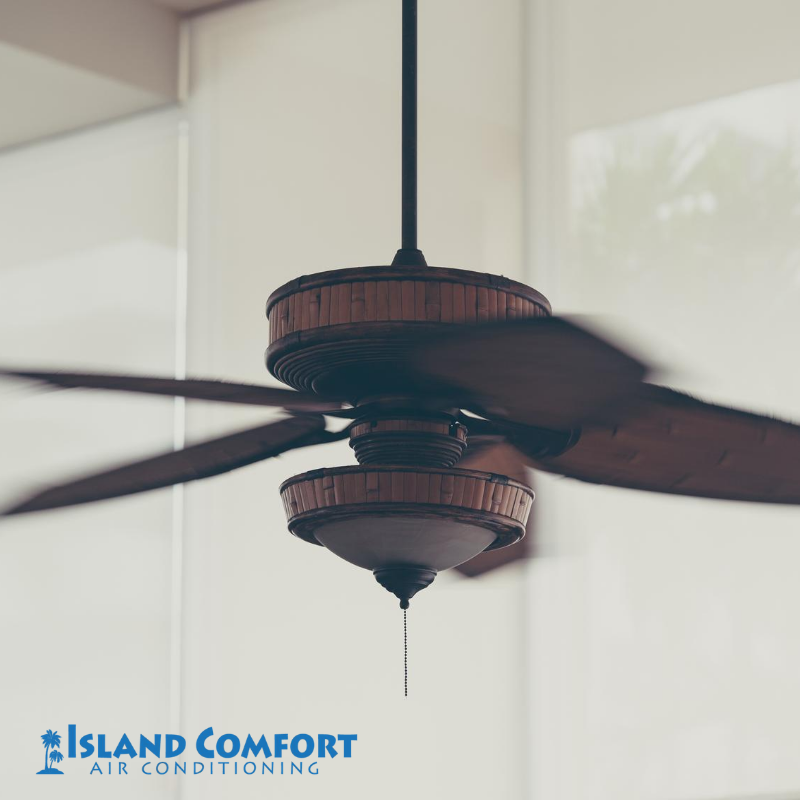 Living in Hawaii, we all have at least two things in common: we want to stay cool during the scorching summer days and we want to save money.

Hawaii residents already deal with some of the highest electricity bills (and cost of living) in the nation. Air conditioning is one of the biggest expenses driving up electric bills across the islands.

But should you run a ceiling fan with your AC unit? Will it keep your home cooler so you can run the AC less? Will it help you save money on your electricity bill?

Every home is different, and how you run your ceiling fan and AC in tandem also matters.

If you’re looking for ways to save money on air conditioning costs even further, give our experts at Island Comfort a call. We can perform a 32-Point Tune-Up so your system runs as efficiently as possible and offer suggestions for an energy-efficient upgrade if that’s your goal.

How Do Ceiling Fans Work?

Many people don’t realize that ceiling fans don’t change the temperature in a room. Nope! What they do is add wind chill, which makes it feel cooler.

Think about how you check the weather before heading to North Shore. Your app might tell you the air temperature is 83 degrees, but with the wind chill, it feels more like 78. Even if the wind’s air is also 83 degrees, the act of the wind passing over your skin makes it feel cooler than it really is.

Ceiling fans were invented and made their way into residential homes long before air conditioning was even a thought. The technology behind them, while simple, is extremely efficient. By increasing the wind chill of a room, a ceiling fan can make it feel up to 5 degrees cooler.

The Size of Fan Blades Matters

Not all ceiling fans are the same. Sorry to say, but those chic little palm leaf blades aren’t the best choice from a comfort and energy standpoint.

The shorter the blade, the less efficient the fan. It might seem like a wide and short blade would work simply fine, similar to a hand-held fan. However, you ideally want a ceiling fan with very long blades.

Long blades are also more efficient. You can check the efficiency of your fan if you still have the manual. You could check the top of the fan for a sticker label as well.

Anything with a motor generates heat. The longer you run a piece of machinery, the more heat it will generate.

Your ceiling fan is no different. As your ceiling fan runs, it generates heat, which in turn heats the air around it. This is important to remember when you consider that the wind from ceiling fans doesn’t actually cool down the air – it just increases the wind chill and makes it feel cooler.

How to Choose the Right Ceiling Fan for Your Room

First, it’s important to understand how to use your ceiling fan most efficiently. Energy.gov recommends following these strategies:

Energy.gov also recommends using a 36-44-inch diameter fan for rooms up to 225 square feet. A fan 52-inches or larger should be placed in larger rooms. If your room is longer than 18 feet, it’s best to install two fans rather than one large fan.

How to Use Your Ceiling Fan and AC Unit in Tandem

Now that you understand how ceiling fans work and their effects, here’s how to use your ceiling fan and AC together.

A ceiling fan can make your room feel up to four degrees cooler than the actual temperature. In other words, you can set your AC to a whopping 80-degrees, but running your ceiling fan will make it feel like it’s 76-degrees.

Since your temperature is set higher, your AC unit won’t have to run as often, but you won’t have to suffer through stifling heat. This saves you money because the average AC unit costs 36-cents per hour to run while an average ceiling fan costs just 1-cent.

In theory, turning your temperature up just four degrees can save you up to 17-cents per hour. That might not seem like much, but it quickly adds up during the summer when you might run your AC unit 24/7 for months at a time.

Now, those are average prices. An old inefficient ceiling fan might cost much more than that while a highly efficient AC system could cost much less.

However, there’s an even better way to save: if it’s not super humid, try giving your AC unit a break for a few days (or at least at night when it cools down) and relying on your ceiling fan instead. You can save much more money this way.

If you’re unsure about your average per-hour costs, give us a call at Island Comfort. We can investigate your system, run a routine maintenance check, and let you know the best way to save money.

No People = No Reason to Use the Fan

If there’s no one in the room to feel the wind chill from the fan, you’re wasting money.

If you set your AC to 80 while you’re away at work, leaving your ceiling fan on won’t change how often the AC unit runs throughout the day. Running both when no one is in the room is a waste of money.

Instead, use your ceiling fan and higher AC temperature in tandem while you’re home. Turn off the fan ASAP as you leave each room.

If you’re unsure about the unique needs of your home or haven’t had an AC tune-up this year, Island Comfort can help. Our experts can run a 32-Point Tune-Up to replace faulty parts, replenish coolant, and make sure your system is running as efficiently as possible. Upgrading to an energy-efficient system can save you even more money through monthly electric bills.

Schedule an appointment with the experts at Island Comfort now or call 888-781-0364.